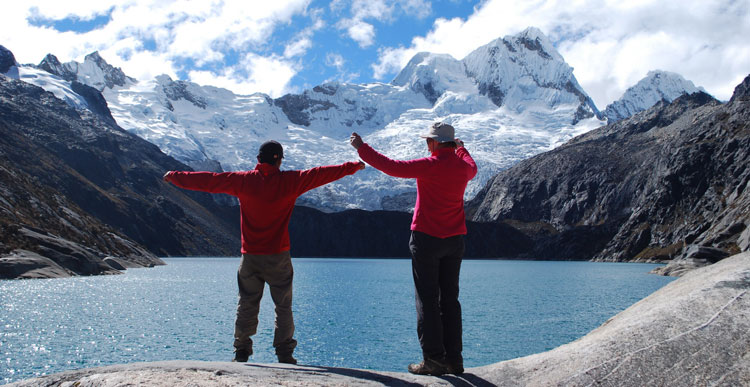 The Cordillera Blanca (“White Mountain Range”) is the world’s highest tropical mountain range. The name is a true testament to the range of almost countless snow-capped peaks, many of which are visible from Huaraz.

It is a compact range being 180 kilometres long and only 20 kms wide covering 340,000 hectares, but within this relatively small area there are 35 snow covered peaks that are above 5,700 meters and another 27 that soar over 6,000 meters above sea level. The highest is Huascaran at 6,768 meters and there is also the spectacular pyramid of Alpamayo, voted in many publications to be the most beautiful mountain in the world. The snow-covered peaks, the numerous glaciers and glacial lakes, the high plateaus intersected by deep ravines with torrential creeks and the variety of vegetation types form a spectacular landscape of rare beauty. In 1985 Huascarán National Park was designated a UNESCO World Heritage Site in recognition of the exceptional natural beauty, diverse & unique flora and fauna, biodiversity and archaeological values contained within the area

Exquisite Rima Rima Flowers Lost in a Sea of Lupins

There are countless trekking and hiking trails passing through beautiful valleys with lakes and impressive waterfalls and vertical rock faces, and crossing passes that reach up to 4850m in altitude.

We have many trek options from 3 to 13 days which transverse through the valleys and ranges of the Cordillera Blanca, offering some of the most varied and spectacular trekking scenery of anywhere in the world.

Among the many Cordillera Blanca trekking options is the famous 4 or 5 day Santa Cruz Llanganuco trek, one of the most highly rated short treks anywhere in the world. 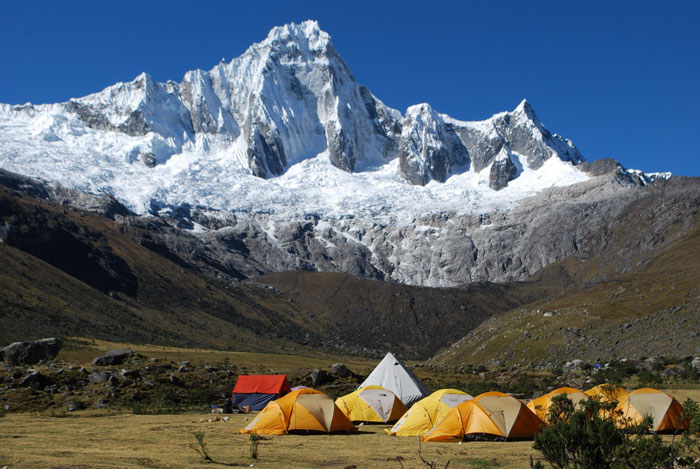 Or are you looking for a remote Peru trekking & hiking experience, away from the busier trails and tourist “hot spots”? Check our Olleros to Chavin trek (3 days) with Llama & Horse trek options and Olleros to Carhuascancha and Chavin Trek (6 days) – Llama trek option

CLIC on the treks listed below for descriptions: 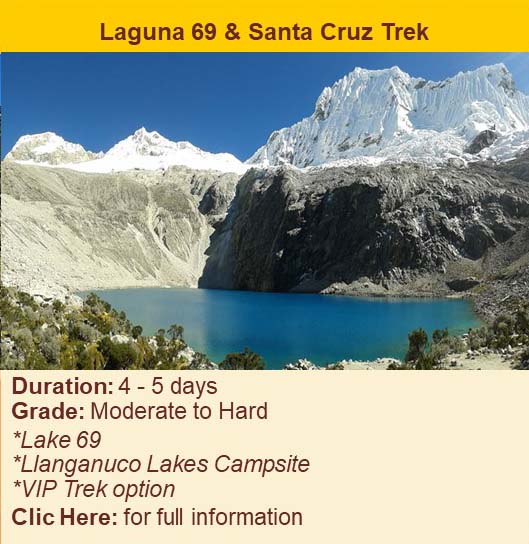 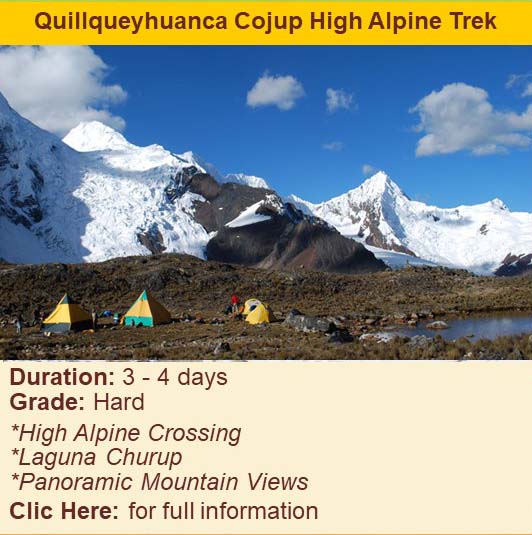 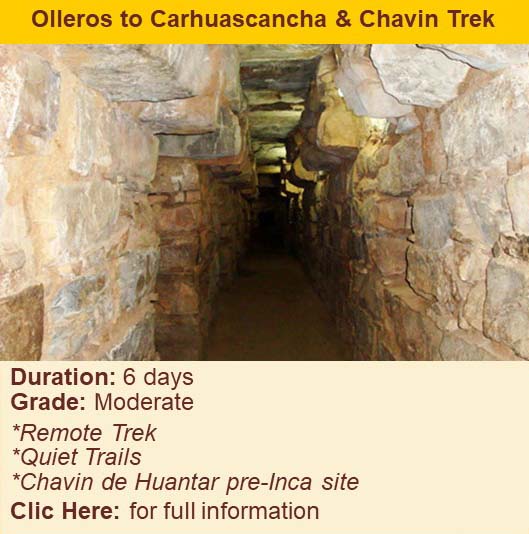 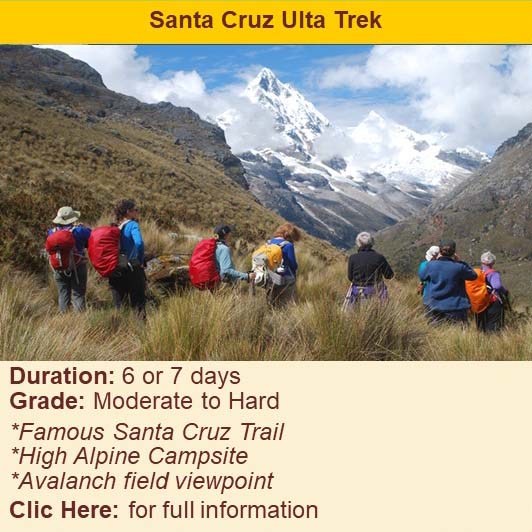 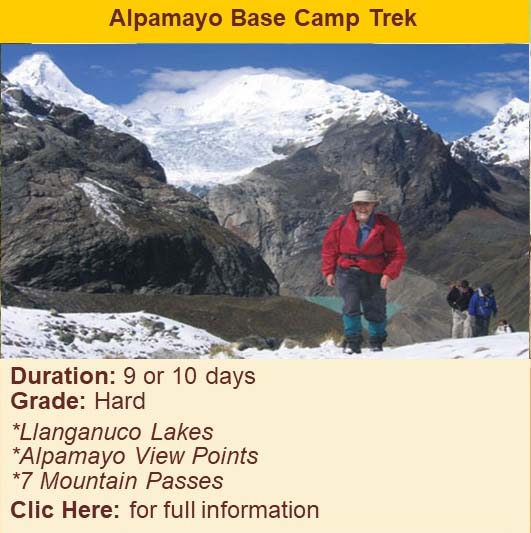 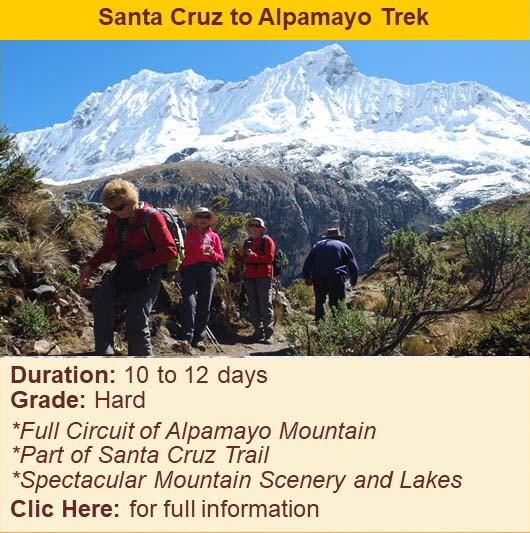 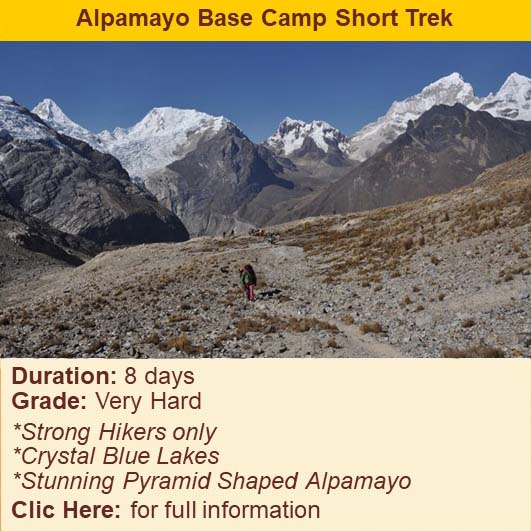 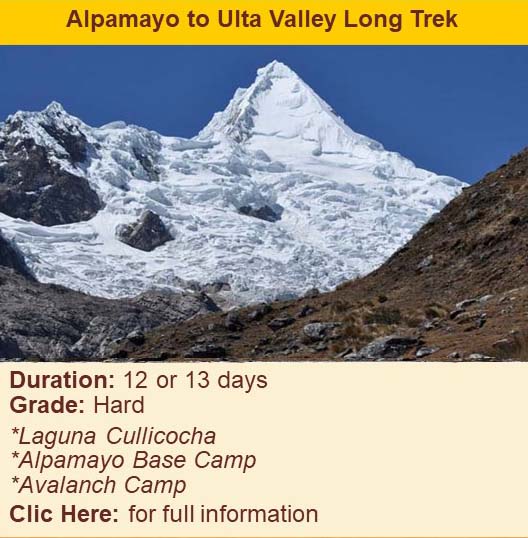 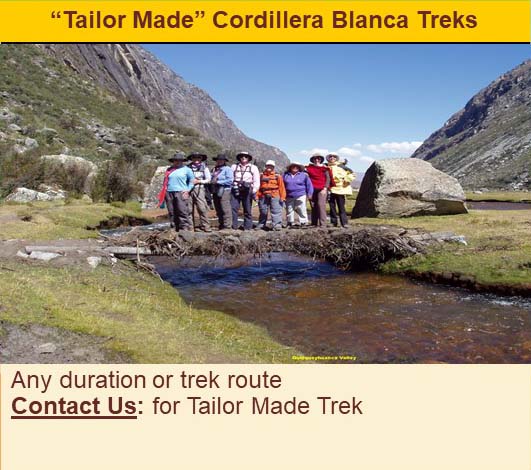 Trek Grading & Fitness
Trek grading and walking times are average estimates only for people of average fitness and who are well acclimatised to the altitude. Some people will be much faster and others will find it more difficult and be much slower. Estimated times have been based on our experience with previous groups. Your own hiking speeds will depend on how well you have adjusted to the altitude as well as your own personal fitness level. The effects of altitude do make the hiking much harder than a similar trek closer to sea level would be and different people adjust to the altitude in a different timeframe.

You need to have average to good fitness and be able to hike a sustained uphill climb for 2 to 3 hours without distress and manage the long descents down from the passes to be able to enjoy these treks, and also be able to manage several nights sleeping in tents in sometimes very cold conditions.

Easy / Moderate Trek: have some almost flat & easier walking mixed with moderate steepness hill hiking or climbing to the top of a mountain pass that is less strenuous than some of the other pass climbs

Moderate Trek: Will have a sustained climb to at least one high mountain pass (up to 4800m) with a corresponding steeper descent back down, mixed with some valley hiking. There can be some longer days (around 6 hours hiking) mixed with short days

Hard Trek: Some treks are considered to be Hard, generally because there are some long hiking days on trek. There will be multiple high mountain passes to cross (up to 4800m), with some treks having a high pass almost every day on trek. Routes can be less utilised so can be in rougher condition that some easier trek options. You should have above average fitness for these treks, good endurance and be able to hike for a long day 8 to 10 hours (taking your time and enjoying the views)

Note: that most trekking options in the Cordillera Blanca should be considered to be physically demanding owing to the altitude (you are above 4000m for the duration of the treks) and the mountainous nature of the terrain. Trails are often steep – both ascending or descending. Trails are not formed walking paths and can be uneven, slippery & rocky in places. It is a common comment from clients that they found the hiking to be harder than they were expecting.

This is usually due to the effects of altitude which invariably leaves people feeling less energetic than they would on similar hikes at lower altitudes. If you do not think you can enjoy this type of trekking, let us know and we can suggest some easier options

During treks we use donkeys to carry camping & cooking equipment, tents, food and your personal bag. You only carry a light day pack with camera, snacks, water bottle, warm jacket etc.

Our guides and crew are very experienced and know how to manage trekking at altitude. We always walk slowly, take plenty of rest breaks and make sure that you have plenty of boiled water to drink.

See our SERVICES page for a full description of services that we offer.

Altitude and Acclimatisation:
Before departing for your Cordillera Blanca trek it is important to be well acclimatised to avoid possible altitude related illness.

Altitude symptoms vary but can include headache, nausea or vomiting, breathlessness, lack of appetite, stomach problems, extreme lethargy and lack of energy, inability to sleep – from mild to severe in extent. In extreme cases pulmonary or cerebral oedema are possible

We do highly recommend that you arrive in Huaraz at least 2 full days (3 nights) before the trek departs to help you become acclimatised to the altitude. It is advisable to have two full days in Huaraz to recover from your travel and do day hikes to higher altitude to help with acclimatisation before departing for the trek.

See our Day Hikes in the Cordillera Blanca page for options

Trek Roads
Access to and from all Cordillera Blanca treks is via high mountain roads. These roads are mostly dirt roads (not paved).

Best Time to Go
May to September are considered to be the months with more settled weather and better chance to have nice hiking weather.

June, July & August are generally the dryer months in the Peruvian Andes but are also the busiest trekking months. May and September are “shoulder” months with some good trekking weather still possible and usually fewer other trekkers on the trails.

May is at the end of the rainy season and spring conditions with spring rain showers still possible, the weather is often improving with often clear skies, everything is fresh and green following the rains and there are lots of wild flowers. September is at the end of the “dry” season and approaching the start of the rainy season, there can still be periods of good weather for trekking and it can be more relaxing with fewer large groups around.

Other Trekking Information: see our MENU-Trek Services & Booking pages for a full description of services that we offer and general trek & climb information.

We are often asked what is the difference between the two regions or which is better for trekking in.
Both areas are very spectacular but different and it is impossible to compare them. Both have amazing snow capped mountains and glaciers that you hike by very close to & both have continuous breath taking hikes up to high passes with incredible views on most days of the treks. 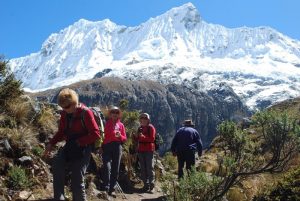 The Cordillera Huayhuash is more open with wide valleys and expansive open grasslands. There is less diversity of plants and trees, although you still do find pretty wild flowers in most places and there are scattered areas of high altitude quenual trees. There are more big lakes in the Huayhuash & many of them contain trout. Many of the campsites are by a lake. There are fewer local people living around the trek circuit than you may find on some Cordillera Blanca routes, just some small farms and a few homes scattered around the lakes. The only villages are Llamac at the start of the trek (where our donkey drivers live) and a couple of other villages close to the trek circuit.
Travel time to the Huayhuash is greater with minimum 5 hours journey to the start of the trek then back to Huaraz after the trek finishes. Generally in Cordillera Huayhuash treks the first day of the trek program is driving from Huaraz to the start point of the trek and camping there the night, with hiking starting the next morning. 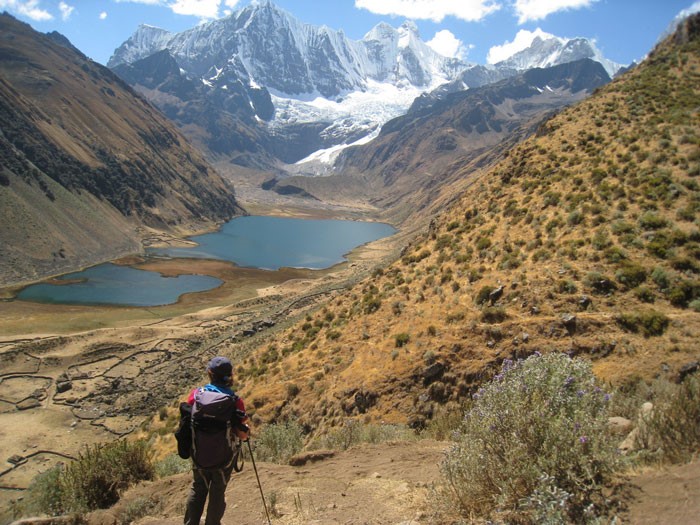 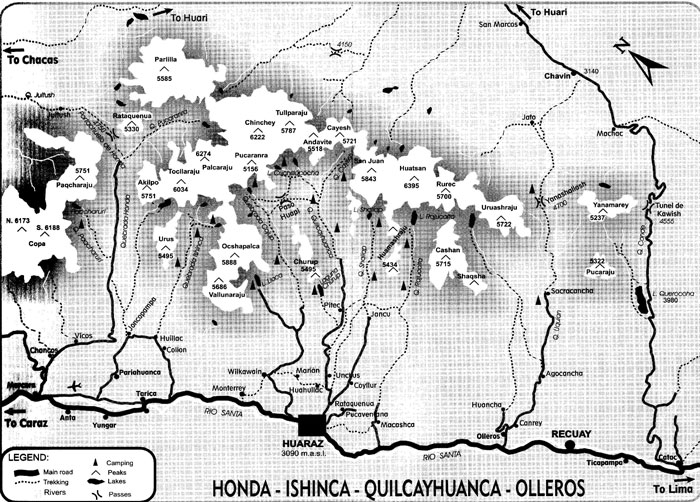